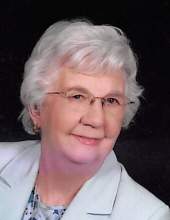 Visitation will be held from 3 to 6 P.M., Sunday at the Cataldo Funeral Chapel in Garner with a VFW Auxiliary service at 6 P.M. Visitation will continue one hour prior to services at the church.

Memorials may be directed to St. Paul Lutheran Church or Little Lambs Preschool.

Bernice Dorothy Peebles, the daughter of Harm and Minnie (Senne) Harringa, was born May 21, 1930 on the family farm near Titonka. She graduated from Titonka High School in 1948 and then moved to Blue Earth, MN where she was employed at Jolly Green Giant. She also worked various other jobs in the Albert Lea area with her sister, Marci. Bernice and her sister, Marci, ventured their way to California where she met her husband, James Hamrick. To this union, three children were born, Brian, Donald and Donna. After James passed away in 1956, with the help of her three-year old toddler, Brian, she met her future husband, Robert Lee Peebles. They were married on December 21, 1957 at the U.S. Naval Chapel in San Diego, CA. Bernice and her three small children traveled back home to Titonka for a short time while Robert was serving duty aboard ship overseas. They returned to California upon his return to the States. To this union four children were born, Marvin, Kris, Dorothy and Rachelle (Shellie). They lived in various locations while Robert continued his military service. The family moved from Japan to Garner in 1967 and then to Klemme in 1969. Bernice was employed at Britt Tech, Klemme Community Schools where she worked as a cook in the lunch program, was a seamstress for PAR Products in Klemme and at Kor-Bert Hams in Klemme. While working at Britt Tech she was proud of receiving a business machine certification through NIACC. Bernice enjoyed bowling, bird watching, sports, watching TV game shows, Iowa and Iowa State sporting events, reading the Bible and Mary Higgins Clark books, her grandchildren and great-grandchildren.

.
To order memorial trees or send flowers to the family in memory of Bernice D. Peebles, please visit our flower store.