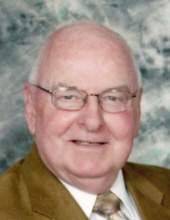 Funeral services will be held at 10:30 a.m., Tuesday, June 28, 2022, at First Presbyterian Church in Woden with Rev. Glenn Wilson and Diane Wilson officiating. Burial will be at Bingham Township Cemetery near Woden.

Visitation will be from 4 to 6 p.m., Monday, June 27th at Cataldo Funeral Chapel, 310 Main St., Woden and will continue one hour prior to services at the church.

Beryl Dean Buffington, the son of Orval and Gertie (Sleper) Buffington, was born April 23, 1942, in Titonka. He grew up on a farm near Crystal Lake and graduated from Woden-Crystal Lake High School in 1960. On September 2, 1961, he was united in marriage to his high school sweetheart and the love of his life, Sharon Isebrand at the Crystal Lake Methodist Church. They lived in Woden, Garner and Britt until 2007 when they returned back home to Woden. Beryl worked at the Woden Lumber Company and later the Farmer’s Cooperative in Garner as the manager of the lumber yard. In 1997, he purchased the Britt Lumber Company which he operated until retiring in 2007. Beryl stayed busy in retirement building an extensive model train set and many miniatures of his various interests. They were all invented and created by hand. He loved showing his creations to everyone who visited. Beryl’s train will be displayed at Heritage Park in Forest City and many of his miniatures at the Kossuth County Ag Museum in Algona. Beryl would be happy that many people will be able to enjoy his works.

He was a member of First Presbyterian Church in Woden where he served as an Elder and a Sunday School teacher.

To send flowers to the family in memory of Beryl D. Buffington, please visit our flower store.