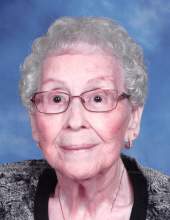 Funeral services will be 10:30 a.m., Wednesday, July 7, 2021 at the United Methodist Church in Garner with Rev. Michael Shaffer officiating.  Burial will be at Madison Township Cemetery in Forest City.

Betty Ann Arnold, the daughter of Gustav and Anna (Stoltenberg) Schulz, was born December 7, 1927 on the family farm northwest of Hayfield.  She attended and graduated from Hayfield Consolidated School in 1945.  After high school she worked at Central State Light and Power in Garner.  On December 31, 1947 she was married to Frank W. Arnold and the United Methodist Church in Forest City.  They made their home in Forest City until 1978.  To this union three children were born at the Forest City Hospital:  Jean Ann, Frank Gustav and John Michael Arnold.  During their years in Forest City Betty was active in the United Methodist Church, Church Circle, Sunday school, American Legion Auxiliary, Brownie and Girl Scouts and Cub Scouts.  Betty started the first 4-H Club in Forest City.  From 1963 to 1978 she worked at Great Western Products (Lamp Shade) in Forest City.  In 1978 Betty and Frank moved to Reno, Nevada.  In Reno, she was Room Reservation Clerk for MGM Grand, Bally’s Reno and Reno Hilton Hotels.  She was active in the United Methodist Church and Church Circle in Sparks, NV.  Betty and Frank were able to take many trips while they lived in Reno.  In 1994 they returned to Iowa and made their home in Garner where she was active in the United Methodist Church, Church Circle, quilting at the church and American Legion Auxiliary.  She enjoyed her family, grandchildren and great grandchildren.

She was preceded in death by her parents; husband, Frank in 2008; an infant brother, Glen Schulz; two sisters, Darlene Adams and Lois Schmoll; and a brother, Don Schulz.
To order memorial trees or send flowers to the family in memory of Betty A. Arnold, please visit our flower store.