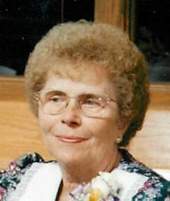 Betty Hutson Johnson, the daughter of Harry and Myrtle (Lackore) Baker, was born December 1, 1930 in Forest City. She was baptized and confirmed at the United Methodist Church in Forest City. Betty attended and graduated from Forest City High School. In September of 1950 she was married to Richard "Dick" Hutson. They lived on a farm south of Forest City for a few years before moving into town. Betty enjoyed her work with co-workers at Waldorf College and Snyder Drug Store. In July of 1990, Dick passed away. A chance meeting rekindled a friendship and she was married to Eugene "Gene" Johnson in December of 1995. Betty looked forward to visits with her family and attending her grandkids sporting events. Betty and Gene enjoyed traveling to Rockport, TX for the winter months and summer trips to Washington to see Gene's family.

Betty is survived by her husband, Gene of Forest City; two daughters, Sandra Hugelen of Forest City and Lois Hutson of Clear Lake; three grandchildren, John (Ali) Riherd and their three children, Kobe, Kale and Kendall of Parkersburg, Jodi (Travis) Washek and their two children, Tyler and Melanie of Minnetonka, MN and Alyssa (Jaona) Rakoto and their two children, Joshua and Bella of Forest City; her step-sons, Doug (Cindy) Johnson of Tacoma, WA and Mike (Helen) Johnson of Lakewood, WA; step-grandchildren, Tara (Jim) Strand and their daughter, Alyssa and Jason (Holly) Johnson and their three children, Chandler, Noah and Meagan all of Puyallup, WA; two sisters, Melba (Sverre) Osnes of Patterson, CA and Vivian (Sidney) Kvale of Lake Mills; sisters-in-law, Barbara Baker of Nora Springs and Evelyn Baker of Emmetsburg; and many nieces and nephews.

The family would like to thank and remember Hospice of North Iowa in her memory.
To send flowers to the family in memory of Betty Hutson Johnson, please visit our flower store.