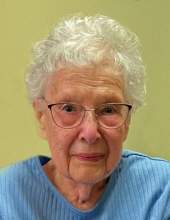 Funeral services will be held 10:30 a.m., Wednesday, May 4, 2022, at United Presbyterian Church in Garner with Pastors David Skilling and Tony Raw officiating. Burial will be at Concord Township Cemetery.

Visitation will be from 5 to 7 p.m., Tuesday at Cataldo Funeral Chapel, 160 E. 4th St., Garner and will resume one hour prior to services at the church.

Memorials may be directed to United Presbyterian Church, Gateway Hospice or donor’s charity of choice.

Betty Jane Halverson, daughter of Jacob and Fannie (Heginger) Blumer, was born February 8, 1926, on a farm in Liberty Township, Hancock County. She attended country schools in Ell Township and later in Concord Township until the 8th grade. Betty met her husband, Alvin Halverson, while attending the Miller Lutheran Church now known as Faith Lutheran Church. On May 21, 1945, she was married to Alvin at Miller Lutheran Church. They lived on a farm north of Garner until moving into town in 1969. Betty was a stay-at-home mom but later worked as custodian at the United Presbyterian Church and Pronk Law Office until she retired in 2011. She loved to knit, crochet, sew and make craft items. She was charter member of From the Heart Workshop at the United Presbyterian Church which began in 2006 and knitted many baby caps which were given to the hospitals, stocking hats and mittens for the school, and coasters for Concord Care Center. She also made craft items, many without patterns, she’d just look at something and make her own pattern from it. She was a member of the United Presbyterian Church of Garner and the North Garner Community Club until it disbanded.

The family would like to thank all of the people that took care of Betty including Cardinal Grove Assisted Living, Concord Care Center, Iowa Specialty Hospital and Gateway Hospice.

To send flowers to the family in memory of Betty J. Halverson, please visit our flower store.