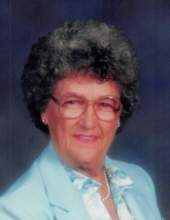 Visitation will be held one hour prior to services at the funeral chapel. Memorials can be given to Gateway Hospice, 103 2nd Ave. NE, Clarion, IA 50525.

The family requests that masks be worn during both the visitation and funeral service.

Betty Jean Watkins, the daughter of Lacey and Amanda (Carson) Watkins, was born  April 8, 1925, in Mason City. At age six, she moved to live with her Grandmother Watkins in  Clear Lake, where she attended school. On May 23, 1941, she married Thomas Claire McIlvain  in Bethany, Missouri. In April of the following year, they welcomed a daughter, Connie Mae.  During World War II, the family lived in the Puget Sound area of Washington, where both Betty  Jean and Tom worked at defense plants that produced battle ships and planes critical to the war  effort. Afterward, they returned to Mason City, where they prospered in the construction  business, developing Lake Conatoma, Parkridge, Brookside, and Rolling Acres housing  developments. Betty Jean acted as both bookkeeper and realtor, and she contributed greatly to  the business with her sharp intellect and work ethic. During this period, the family also  welcomed a second child, Thomas Robert. In 1963, the family moved to Madison, Kansas,  where they operated a ranch. Betty Jean managed the financial records of their cattle business  while also actively working on the ranch. In 1968, they moved to Pompano Beach, Florida,  where Tom began working as a housing contractor in the Fort Lauderdale area. During this time  Betty Jean completed her G.E.D., which she’d postponed in 1941. The family moved to Emmett,  Idaho, in 1971, where Tom divided his time between farming and remodeling the family  farmhouse, while Betty Jean again managed all of it. In 1978, they retired to Sarasota, Florida.After Tom’s death in 1981, Betty Jean remarried in 1983 and traveled extensively with her second husband, Maxwell Fiske. After Max’s death in 2006, she moved back to Garner to be  near her daughter Connie.  Betty Jean shared her love of music with her children: her son Tom, who played the cello,  and Connie, who was the organist for the Peace Reformed Church for nearly fifty years. It was  also Betty Jean’s love of reading and learning that her children inherited. Betty Jean enjoyed  gardening, bird watching, and lavishing affection on her little dog Corky.

She was  preceded in death by her parents, her husbands, Thomas McIlvain and Maxwell Fiske, and her  sisters, Zelma and Mary Anne.
To send flowers to the family in memory of Betty Jean (Watkins) McIlvain Fiske, please visit our flower store.