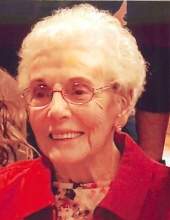 According to her wishes she will be cremated and graveside services will be held 11:00 A.M., Saturday, August 18, 2018 at Oakland Cemetery in Forest City.

Betty June Baldwin was born in Quimby, Iowa on February 25, 1923 to Ernest and Henrietta Hass Conley. She graduated from Quimby High School in 1940 and on September 18t,h 1940 married Russel V. Baldwin.

The couple farmed for several years before moving to Paullina. In Paullina, their family grew to 5 sons. In 1959 the family moved to Nashua where Russ managed the Nashua Equity Co-op and Betty was employed by the Nashua Reporter.

In 1961 they moved to Forest City, where Betty worked directly with John K. Hanson at Winnebago. She was the 32nd employee ever hired by the company and at her retirement on April 27th, 1990 John K. recognized her for billing out more than 230,00 motor homes over the years and that her employee number was now number 8.

Betty and Russ traveled extensively and for many years enjoyed the winters in Mesa, Arizona.

Betty was a member of the Methodist Church and enjoyed writing short stories for Cappers Weekly and other magazines. She especially enjoyed reading and was grateful to the Forest City Library who regularly provided her with books and reading material.

Betty was preceded in death by her husband Russ in 2009 and two sons, Steven and Randy.

In lieu of flowers, the family requests memorials to the Forest City Library.
To send flowers to the family in memory of Betty June Baldwin, please visit our flower store.