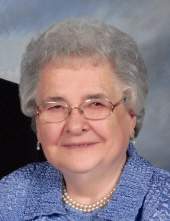 Betty (Marie Elizabeth) Tlach, 92, of Britt, formerly of Garner, passed away Wednesday, March 18, 2020 at the Hancock County Memorial Hospital in Britt surrounded by her children.

Due to state and local authorities limiting the number of people at a gathering, a private family service will be held Saturday, March 21, 2020 at St. Wenceslaus Catholic Church in Duncan with Rev. Fr. Paul Lippstock officiating. There will be a celebration of life held at a later date. Burial will be at St. John’s Catholic Cemetery in Duncan.

There will be no visitation. Cataldo Funeral Home is in charge of arrangements.

In lieu of flowers, memorials may be directed to the Betty Tlach Memorial Fund.

Betty Tlach, the daughter of Frank and Bessie (Vonasek) Hejlik, was born March 27, 1927 on the Hejlik family farm west of Duncan. She attended the rural schools of Britt Township #7. On November 18, 1947 she was married to George Tlach at St. Wenceslaus Catholic Church in Duncan. They lived on the Tlach family farm north of Duncan where they farmed together and raised their family. In 1990, they moved to Garner

Each spring Betty planted a bountiful vegetable garden and her flower gardens were always in bloom. She enjoyed baking, especially Czech pastries of kolache and rohlicky. Betty also spent numerous hours sewing however her true passion was making quilts for each of her grandchildren and greatgrandchildren. Honorary pallbearers will be her grandchildren who she loved dearly. Betty and her husband, George, loved to dance and could often be seen dancing at the Duncan Community Hall with friends and family, even making trips to ballrooms around the Midwest.

Betty was a woman of great faith. She was a member of St. Boniface Catholic Church in Garner, Catholic Daughters of the Americas and Rosary Society.