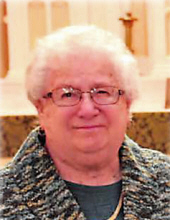 Beverly Ann Anderson, the daughter of Dale and Doris (Nonnweiler) Young, was born May 24, 1936 in Garner. She was baptized at Faith Lutheran Church in Miller. Beverly grew up in Garner and graduated from Garner High School in 1954. In August of 1954 she began working at Northwestern Bell Telephone Company in Garner. She later was transferred to Glendale, CA where she lived for a short time before returning to Garner in 1959 as group chief operator for NW Bell. In 1962, she was transferred by the company to Red Oak, Iowa. On March 23, 1963 she was married to Roy L. Anderson at the United Methodist Church in Garner. They lived on the Anderson family farm north of Ventura where they raised their family. Beverly continued her employment with the telephone company in the Mason City, Algona and Des Moines offices until 1986, when she retired from U.S. West. In 1988, she and Roy moved from the home farm to Ventura Heights. She enjoyed her family, grandchildren, great-grandchildren, crocheting and fishing at Leech Lake in Minnesota.

She was member of St. John’s Lutheran Church in Garner where she belonged to the Fellowship Club and was a charter member of the Evening Guild.

She was preceded in death by her parents, Dale and Doris Young; her husband, Roy, June 1, 1995; her son, Bart in 1973; and sister, Janice Young in 1993.
To order memorial trees or send flowers to the family in memory of Beverly A. Anderson, please visit our flower store.
Send a Sympathy Card