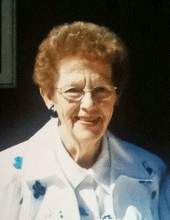 Funeral services will be held 10 A.M., Tuesday, April 12th at the Cataldo Schott Funeral Home in Forest City. Burial will be in Oakland Cemetery.

Visitation will be held from 5 to 7 P.M., Monday at the funeral home.

Donations can be made in her honor to Good Samaritan Center in Forest City or James River Care Center in Springfield, MO.

Beverly Bea (Potter) Larson was born on February 8, 1934, the daughter of Dr. Charles and Marion Potter. She graduated from Forest City High School. On November 9, 1952 she married Wally Larson at the United Methodist Church in Forest City. They had three children, Stephen, Kay, and Barbara. Beverly was a stay-at-home mom on the farm in Joice for 15 years. The family then moved to Forest City to live in Doc Potter’s home on Main Street (where she grew up). She enjoyed working at the greenhouse and library. Beverly always loved to go places. Her joy was being with her children and grandchildren. They were everything to her. We will so miss her smile and laugh.

Beverly was proceeded in death by her husband, Wally; her son, Steve; her daughter, Kay Lee; two daughters-in-law, Kristi Larson and Opal Larson; her parents; a sister, Betty Estrada; and two brothers, Bob and Bill Potter.
To order memorial trees or send flowers to the family in memory of Beverly B. Larson, please visit our flower store.