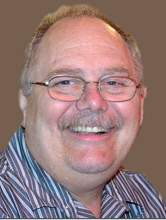 Funeral Services will be held 2:00 P.M. Friday, June 20, 2014 at Immanuel Lutheran Church in Forest City with Rev. Rodd Hopp officiating. Visitation will also continue one hour prior to services on Friday at the church. Inurnment will be held at a later date. The family requests that in lieu of flowers memorials may be directed to the Robert "Bob" Levad memorial fund in care of the family.

Robert Francis Levad was born January 8, 1956 in Forest City, Iowa the son of Elmer G. and Marie L. (Drugg) Levad. He attended Forest City Schools graduating in 1974. After school he studied computer technology at ISU. He enjoyed working at El-San in Crystal Lake where he met lifelong friends. He continued his love of computers working at Winnebago Industries in the Information Technology department. He finally caught Debra and married her on October 5, 1991. Bob was a long-time resident of Crystal Lake, where he served a term as Mayor, was a member of the Fire Department and First Responders and was always active in the community. He and his wife Deb moved to Forest City in 2001. Pete, a family nickname, enjoyed golfing, fishing, hunting, star gazing, camping and spending time at the "Outpost". Bob also had his pilot's license for many years and enjoyed flying. He always enjoyed computers and staying connected with the newest technology, dragging stuff home with his brother from many a Ham Radio event. Bob had a great sense of humor and was known for always having a good joke. He enjoyed the times he spent with his family and friends and will be missed by all who knew and loved him.

He was preceded in death by his parents; brothers, Chuck, Rich and Eddy Levad and mother and father-in-law, Derold "Jack" and Alice Titus.

To send flowers to the family in memory of Bob F. "Pete" Levad, please visit our flower store.