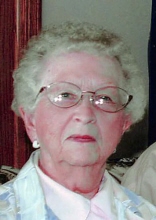 Funeral services will be held 11 A.M., Wednesday, October 9th at the Cataldo Funeral Home in Britt with Pastor Robert Dishman officiating. Burial will be at Glenwood Cemetery in Goldfield.

Visitation will be held from 5 to 7 P.M., Tuesday at the Cataldo Funeral Home in Britt. Visitation will continue one hour prior to services at the funeral home.

Bonna Belle Wilson, the daughter of P.W. and Vera (Dunmire) Beukema, was born on June 23, 1919 in Reasnor, IA. She graduated from Newton High School in 1938. Bonna married Clarence Wilson of Altoona, IA on October 6, 1940. They moved to Britt in 1958 after farming in the Altoona area for many years. Bonna was a homemaker and enjoyed crocheting, embroidery, traveling and gardening. She liked to play cards and dominoes, especially with her kids and grandkids. She made her home at the summit house in 2011 following her husband's passing.

She was a member of the Park Church of Christ in Goldfield and the Britt Senior Citizens.

She was preceded in death by her husband, Clarence, May 1, 2011; her parents P.W. and Vera (Dunmire) Beukema; brothers, Richard, Wayne and Byron Beukema; and a sister, Betty (Beukema) Barnes.
To order memorial trees or send flowers to the family in memory of Bonna Belle Wilson, please visit our flower store.
Send a Sympathy Card