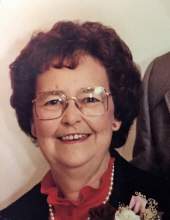 Bonnie Lou Steiff, the daughter of Charles and Elsie (Monsen) Wilson, was born January 9, 1932 in Forest City, Iowa. She attended Forest City Schools. On August 12th, 1949 she was married to Raymond Steiff. They farmed west of Forest City for twenty years where they raised their sons, Ronnie, Roger and Robert. Bonnie and Ray moved into Forest City in 1970. Bonnie worked for the Bakery for many years as well as Waldorf University. She enjoyed her family and working outside on her flowers and yard.

She was preceded in death by her parents; husband, Raymond; a grandson, Terence Steiff; brother, Jimmy Wilson; and sisters, Marjorie Heimdal, Betty Hockett and June Zuehl.
To order memorial trees or send flowers to the family in memory of Bonnie L. Steiff, please visit our flower store.