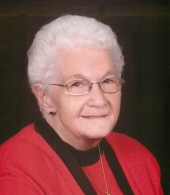 GARNER - Bonnie L. Steward, 83, of Garner died Wednesday, October 16, 2013 at her home under the care of her three daughters and Hospice of North Iowa.

Visitation will be held from 5 to 7 P.M., Friday at the Cataldo Funeral Chapel, 160 E. 4th St., in Garner and will continue one hour prior to services at the church.

Bonnie Lucille Steward, the daughter of Morse and Marie (Leens) Hunst, was born May 28, 1930 in Belmond. She grew up on a farm southwest of Belmond, attending country school and Belmond Community High School. On January 25, 1946, she married Kenneth D. Modderman and to this union four children were born: Pamela Sue, Jeffery Morse, Jane Marie, and Amy Lou. After Kenny died in 1957, she moved the family to Trona, CA, for one year. She then returned to Belmond and worked for Farmers Grain Co. in Belmond. After the tornado, she moved to Clear Lake in 1967 and worked at the Soybean Plant in Mason City for 19 years. On November 29, 1974, Bonnie married James O. Steward in Clear Lake. They moved to Garner in 1975 and owned and operated the Black Velvet Inn from 1976-1979. Bonnie retired from AGP Soybean Processing Plant in 1986 and then managed the Black Velvet II at the Garner Golf and Country Club for one year. After Jim's death, Bonnie enjoyed spending winters in Pahrump, NV, with her youngest daughter, Amy.

She was a member of St. Paul Lutheran Church and LWML.

Bonnie was preceded in death by her parents; husbands Kenny in 1957 and Jim in 2008; sisters, Laura Stoffer Saunders and Alice Mae Peterson; son, Jeffery in 1973; grandson Joshua Greiman in 1993; step-grandson Michael Steward in 1993; and step-son-in-law Bill Schnitkey.

To order memorial trees or send flowers to the family in memory of Bonnie Lucille Steward, please visit our flower store.
Send a Sympathy Card