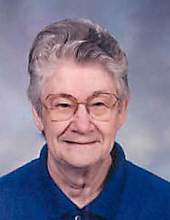 Visitation will be held from 5 to 7 P.M., Tuesday at the Cataldo Funeral Chapel, 160 E. 4th St., in Garner with a Rosary Society rosary at 4:45 P.M. Visitation will continue one hour prior to services at the church.

Bonnie Zoe Boeshart, the daughter of Birch and Barbara (Humphrey) Robison, was born May 5, 1924 in Fertile. She attended and graduated from Garner High School. After high school, Bonnie moved to Ohio where she began work at a grocery store and met her future husband. She was united in marriage to William Bazil Boeshart on November 18, 1943 in Danville, Ohio. The couple farmed east of Garner until 1956, when they moved southwest of Ventura. In 1985, they retired from farming and moved into Garner the following year. Bonnie also worked at Ventura Community Schools in the cafeteria. She enjoyed crocheting, playing 500 and bridge, cooking, baking, and loved spending time with her grandkids.

She was an active member of St. Boniface Catholic Church, Rosary Society and was a former member of the Catholic Daughters of the Americas.

She was preceded in death by her parents; husband, Bill, March 15, 2006; four sisters Vivian Oppedahl, Geneva Hansen, Edna McCaulley and Beverly Anderson; and grandsons, Jeff and Ryan Boeshart.
To order memorial trees or send flowers to the family in memory of Bonnie Z. Boeshart, please visit our flower store.