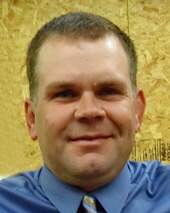 MASSENA - Brian L. Follmann, 40, of Massena, Iowa died Wednesday, June 18, 2014 from injuries he received in a farm accident near Massena.

Funeral services will be held 10:30 A.M., Monday, June 23rd at St. Patrick's Catholic Church in Massena, Iowa. Burial will be in the Massena Center Cemetery.

Visitation will be held from 1 to 7 P.M., Sunday at St. Patrick's Catholic Church in Massena with family receiving friends from 4 to 7 P.M.

Memorials may be directed to the Brian Follmann Memorial Fund to be established by the family at a later date.

Online condolences may be sent to the family at www.cataldofuneralhome.com or steenfunerals.com

Brian Larry Follmann, the son of Daniel and Janice (Fritz) Follmann, was born January 20, 1974 at Atlantic. He graduated from Cumberland and Massena High School in 1992. During his high school years Brian was active in wrestling and was State Champion in the 145 pound weight class his senior year. He continued his education at Southwest Iowa Community College and then transferred to DMACC where he received his AA degree. He then attended Iowa State University in Ames where he belonged to the Delta Upsilon fraternity. Brian graduated from ISU in December of 1997 with a degree in agricultural studies and a minor in agronomy. On April 10, 1999 he married the love of his life, Amy Rayhons at St. Boniface Catholic Church in Garner. To this union, three children were born, Ethan, Abigail and Jack. They lived in Jefferson for a few years where Brian was employed at West Central Co-Op. In the fall of 1999 they moved to a farm near Anita where Brian continued to work for West Central Coop and began farming with his father, Dan. In the fall of 2009, they moved to the family farm east of Massena. Brian enjoyed spending time with his family, hunting and was an avid Kansas City Royals and Kansas City Chiefs fan.

Brian is survived by his wife, Amy, of Massena; three children, Ethan, Abby and Jack; his parents, Danny and Janice Follmann of Atlantic; sister, Dana (Dusty) Sorensen of Van Meter and their children, Isabella and Sawyer; brother, Dustin (Alissa) Follmann of Monroe and their children, Sidney and Gauge; many aunts, uncles and cousins; his parents-in-law, Marvin and Nancy Rayhons of Garner; and sister-in-law, Bonnie (Brian) Cataldo of Garner and their sons, Samuel, Ray and Reed.

He was preceded by his paternal and maternal grandparents.

To order memorial trees or send flowers to the family in memory of Brian L. Follmann, please visit our flower store.