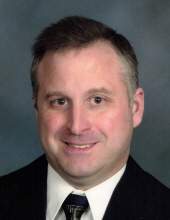 Funeral services will be held at 10:30 a.m., Tuesday, February 22, 2022, at First Lutheran Church in Britt with Pastor Anna Wolf officiating. Burial will be at Evergreen Cemetery in Britt.

Visitation will be held from 4:00 to 6:00 p.m., Monday at Cataldo Funeral Home in Britt and will continue one hour prior to services at the church.

Brian Lynn Nedved, the son of Arnold and Leola (Lacey) Nedved, was born May 6, 1964, in Mason City, Iowa. He was baptized and confirmed at First Lutheran Church in Britt, where he was a member. Brian grew up on a small farm outside Britt, where he helped his dad farm. He loved farm work and was a member of the local FFA chapter in high school. After graduating from Britt High School in 1982, he worked at Marting Manufacturing in Britt before taking a job at Winnebago Industries, in Forest City, Iowa, where he worked on the lines with RV manufacturing. He took a break from working to attend North Iowa Area Community College (NIACC) in Mason City. After completing an associate degree, he returned to Winnebago Industries, where he continued to work for over 30 years. He was an avid hunter and fisherman and enjoyed local deer hunting and turkey hunting in eastern Iowa, where he also spent much time exploring and fishing the streams there for brown, brook, and rainbow trout. Wherever he went, Brian loved to seek out new breakfast and lunch places, engaging the locals as the “visitor” that he was and making new connections with people. Just before his passing, he was looking forward to a trip to eastern Iowa for the maple syrup season.

He was preceded in death by his father, Arnold, April 11, 1995; maternal grandparents, William and Marie Lacey of Belmond, Iowa, and paternal grandparents, Aldrich and Lillian Nedved of Hayfield, Iowa.
To order memorial trees or send flowers to the family in memory of Brian L. Nedved, please visit our flower store.