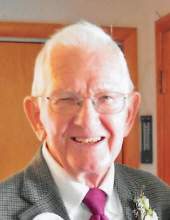 Funeral services will be held 10:30 A.M., Monday, March 18th at the Garner United Methodist Church with Rev. Paul Evans officiating. Burial will be at Concord Township Cemetery in Garner with military rites by the Garner Veterans Ceremonial Unit.

Visitation will be held from 2 to 4 P.M., Sunday at Cataldo Funeral Chapel, 160 E. 4th St., in Garner and will resume one hour prior to services at the church.

Clayton Burke Haberkamp, the son of Verner and Marie (Burke) Haberkamp, was born July 10, 1929 in Mason City. He attended the rural schools of Hancock County and graduated from Garner High School in 1948. He served his country in the U.S. Army during the Korean Conflict in the ammunition depot. After being honorably discharged he returned to Garner working at Asa’s and Bill’s DX Station. On October 18, 1958 he married Muriel McMullin at Grace Lutheran Church in Hanlontown. They lived all of their married life in Garner. Burke worked at Northern Natural Gas as an oiler and shift operator until his retirement in 1993 after 37 years of employment. Burke also worked as a handy-man around Garner doing repair work and painting. He enjoyed woodworking, making furniture, fixing chairs, spending time with his family and traveling.

He was a member of the Garner United Methodist Church where he served as an usher and soundman for many years. He also belonged to the Garner VFW and American Legion. Burke was an assistant Boy Scout Leader for many years and was awarded the Outstanding Citizen of Garner in 2002.