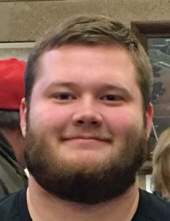 Funeral services will be held 10:30 A.M., Monday, October 14, 2019 at Zion Evangelical and Reformed Church, 760 W. 8th Street in Garner with Rev. Brian Lund officiating. Following the service his body will be cremated with private graveside services at a later date.

Visitation will be held from 3 to 7 P.M., Sunday, October 13th at Zion Evangelical and Reformed Church and will continue one hour prior to services at the church on Monday.

In lieu of flowers, memorials may be directed to the Cale Van Dusseldorp Memorial Fund in care of the family.

Caleb Tom Van Dusseldorp, the son of Scott and Angela (Schultz) Van Dusseldorp, was born January 9, 2002 in Mason City. He was baptized and confirmed at Zion Evangelical and Reformed Church in Garner. Cale attended Garner-Hayfield-Ventura Community Schools where he was currently a senior. He was active in band, mock trial and football. Cale worked for the Garner Aquatic Center and Parks and Rec department for the last two summers. He enjoyed weightlifting with his siblings and dad, spending time with family, tinkering in his wood shop, watching Marvel and action movies, playing video games, and listening to 80’s rock. Cale was a history buff. He had particular interest in Nordic Vikings, the Knights Templar, and early American history. Cale dreamed of a career in forensic science. He also planned to have a life of adventure with sky diving, motorcycle trips, and learning to fly an airplane.

Cale was a selfless, unique, and genuine person. He never put on airs or pretended to be anyone he was not. The Van Dusseldorp family counted on him to be “Mr. Fix-it”. If something was broken or needed to be made, he was the one they asked for help. He took pride in figuring things out on his own. Cale always put the people he loved above himself. He was one of the most loyal people on earth and always had his family’s backs. Those who knew him will miss his sense of humor, quick comebacks, and smile when he got the best of you. There will never be anyone like Cale Van Dusseldorp.

He was a member of Zion Evangelical and Reformed Church in Garner.