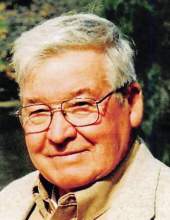 Funeral services will be held 10:30 A.M., Wednesday, September 23rd at Zion Evangelical and Reformed Church in Garner with Rev. Brian Lund officiating. Burial will be in Peace Reformed Cemetery with military rites by the Garner Veterans Ceremonial Unit.

Memorials may be directed to Opportunity Village in Clear Lake.

Calvin “Johnnye” Goll, the son of Harvey and Katherine (Peterson) Goll, was born January 13, 1928 on a farm south of Garner. He attended the rural schools of Hancock County and graduated from Garner High School. Johnnye served his country in the U.S. Army as an NCO in Germany during the Korean conflict. Following his honorable discharge, he returned to Garner. On September 9, 1950 he married Ruth Ann Kurtz at Immanuel Reformed United Church of Christ in Klemme. They lived in Garner until 1958 when they moved to a farm southwest of Garner. In 1993, they retired from farming (well not really) and moved into Garner. Johnnye loved his family, farming, flyingand nature.

He was a member of Zion Evangelical and Reformed Church in Garner where he served as an elder, deacon and Sunday school teacher. He also served on several boards in the community over the years.

He was preceded in death by his parents; wife, Ruth, July 28, 2006; and three sons-in-law, John Jackson, John Whitney and Lee Stadtlander.
To order memorial trees or send flowers to the family in memory of Calvin "Johnnye" Goll, please visit our flower store.