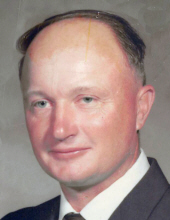 A graveside service will be held 2:00 P.M., Friday, August 14, 2020 at Crystal Township Cemetery with his sister, Peggy Micile officiating. Military rites will be conducted by the Britt Veterans Ceremonial Unit. Cataldo Funeral Home in Britt is in charge of arrangements.

Calvin William Voigt, the son of William and Emma (Kuch) Voigt, was born January 8, 1924 in Freeborn, MN. He graduated from Crystal Lake High School and soon after enlisted in the U.S. Army. He proudly served during World War II in the Philippines. Later in life, he went on an honor flight to Washington, D.C. with fellow veterans who flew out of Mason City. Calvin married Lois Abele on July 20, 1966. Together they farmed east of Crystal Lake. After Lois passed away, he continued to farm for several years until retiring and moving into Britt. Most recently he resided at the Iowa Jewish Life Center in Des Moines.

He was a member of the Britt American Legion.

He was preceded in death by his parents; wife, Lois; sisters, Norma Douglas and Lois Stegen.
To order memorial trees or send flowers to the family in memory of Calvin W. Voigt, please visit our flower store.
Send a Sympathy Card