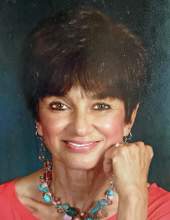 A Celebration of Life service will be held 12:30 p.m., Saturday, September 10, 2022 at the Clear Lake United Methodist Church with a reception following from 2 to 4 p.m. at the Wildfire Restaurant in Ventura.

In lieu of flowers, memorials are preferred to Central Gardens of North Iowa or the Clear Lake United Methodist Church.

Carol Lauer Backus, the daughter of Eugene and Lily (Pagani) Lauer, was born October 8, 1948, in Christopher, Illinois. She graduated from West Frankfort High School in Illinois and continued her education at Southern Illinois University, graduating with a bachelor’s degree in education. Carol moved to Chicago and began working at Chemetron Corporation where she met her husband, David. On July 25, 1975, they were married at the Chicago Temple. Carol was then hired as a sales representative for TWA Airlines, which allowed the couple to travel the world together. Their daughter, Sarah, was born in 1985. They lived in Chicago until 1990 when David was recruited for work in Quincy, Illinois. Carol loved the opportunity to be a stay-at-home mother while she was also highly involved in volunteer organizations. This included past president of Encore! Volunteer Council, Member of Friends in Council, the oldest women’s literary study group in America, fifteen years as an adult Sunday School instructor at Quincy United Methodist Church and was initiated into P.E.O. Chapter EC in 2004. Her love for fitness grew in Quincy, and she became an indoor spin instructor and personal trainer.

In 2005, Dave and Carol moved to Ventura, Iowa for David’s work. Carol continued to serve in P.E.O. Chapter LE as president several times, taught exercise and yoga for the community, and later became a certified yoga instructor. She enjoyed early morning bike rides around Clear Lake and became a self-taught bead artist which she often did while watching Green Bay Packer games with David. Known for her warm hospitality and ability to entertain, Carol was always planning the next party where she could use her beautiful sets of china and stemware. She was passionate about gardening, both her own collection of daylilies as well as helping to organize Central Gardens fundraising efforts. Carol continued her faith walk through involvement with the Clear Lake United Methodist Church as well as sharing her strong spiritual beliefs with friends and family.

She was preceded in death by her parents; husband, David, January 22, 2021; a brother-in-law, Paul Backus; and a nephew-in-law, Joshua Campbell.

To send flowers to the family in memory of Carol L. Backus, please visit our flower store.