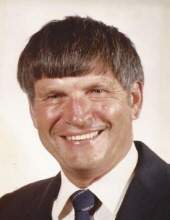 PLYMOUTH, MN – Caroll Hall, 84, of Plymouth, MN gently passed away at his home in Plymouth on January 8th surrounded by his family.

Caroll Hall, the son of Clarence and Clara (Hanna) Hall was born August 31, 1930 in Garner. He graduated from Ventura High School and continued his education at the University of Minnesota where he received his bachelor’s degree. Caroll served his country in the U.S. Army. On December 7, 1957 he married Joann Jacobson. They lived in Brookings, SD where they raised their three children. Caroll was employed as a seed corn sales manager until his retirement.

He was preceded in death by his parents; and brothers, Gordon and Lyle Hall.
To send flowers to the family in memory of Caroll K. Hall, please visit our flower store.