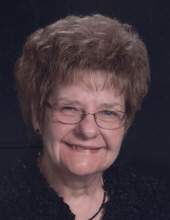 Funeral services will be held at 10:30 a.m., Monday, February 13th at St. Boniface Catholic Church with Rev. Jim Dubert officiating. Burial will be at the church cemetery.

Visitation will be held from 2 to 5 p.m., Sunday, February 12th at St. Boniface Catholic Church in Garner with a Scriptural wake service at 1:30 p.m. followed by a rosary. Cataldo Funeral Home is in charge of arrangements.

Memorials may be directed to St. Boniface Catholic Church.

Carolyn Sue Kumsher, the daughter of Arnold and Gladys (Rutz) Schmidt, was born February 4, 1944, at Rust Nursing Home in Garner. She graduated from Garner-Hayfield High School in 1961 and the American Institute of Business in Des Moines. While living in Des Moines she worked at Meredith Publishing Company in the editorial department of Better Homes and Gardens. On October 17, 1964, she was married to Ronald Kumsher at St. Boniface Catholic Church in Garner. They lived on the Goldie Knapper farm in Britt Township from 1964 to 1965, the Pauline Kuhlman house in Duncan from 1965 to 1966, the Adolph Ptacek farm in Liberty Township from 1966 to 1973 and from 1973 to 2005 on Carolyn’s parent’s farm in Garfield Township. In 2003, they purchased a house from the family of Cliff and Dona Greiman and had it moved into Garner near the Catholic Church. On February 1, 2005, they moved in to the house and their son, Greg, moved onto the family farm in July of 2005. Carolyn was employed at the Hancock County Farm Bureau in Garner and in May of 1981 accepted a position as secretary of St. Boniface Parish in Garner. In July of 2000, she accepted a position as business manager of the Hancock and Winnebago Counties Catholic Parishes. Carolyn was a 4-H leader from 1980 to 1986 and chaired and co-chaired the Open Textile Show at the Hancock County Fair during the 1980’s through July of 1999. She enjoyed her family, music, sewing and scrapbooking.

She was a member of St. Boniface Catholic Church where she served as church organist and belonged to the St. Boniface Parish Family.

Carolyn is survived by her husband, Ron of Garner; two children, Greg (Jennifer) Kumsher of Garner and Janan (Rich) Basinger of Garner; five grandchildren, Tyler, Ryan and Megan Kumsher and Dalton and Brynlee Basinger; and an aunt, Marilyn Miner of Waukee.

She was preceded in death by her parents.
To send flowers to the family in memory of Carolyn S. Kumsher, please visit our flower store.