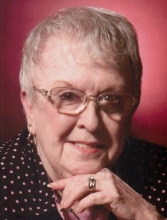 Visitation will be held from 3:30 to 6 P.M., Wednesday at the Cataldo Funeral Chapel, 160 E. 4th St., in Garner with a Scriptural wake service at 3:30 P.M. followed by a Recitation of the Rosary at 4 P.M. Visitation will continue one hour prior to services at the church.

Catherine Elizabeth Kadrlik, the daughter of Daniel and Bernice (Lambert) Flood, was born May 8, 1933, at Sioux City, Iowa. She graduated from Garner High School in 1952. Catherine attended Iowa State University in Ames for two years and graduated from the Iowa State Teacher's College in Cedar Falls. Later on she received her Library Science degree from UNI in 1967. In 1956 she began teaching junior high Home Economics in Rochester, Minnesota. She also was a dance instructor at Arthur Murray School of Dance in Rochester where she met her future husband, Wencl Kadrlik. They were married December 29, 1962 at St. Boniface Catholic Church in Garner. They lived in Garner where Catherine was the high school librarian until her retirement in 1976. She then helped her husband, Wencl, at Hancock County Abstract Company in Garner. Catherine enjoyed dancing, golfing, puzzles, reading, sewing, and especially, spending time with her grandchildren.

She was a member of St. Boniface Catholic Church where she was active in the choir, serving as choir director for many years. She also belonged to the Sweet Adelines, Garner Golf and Country Club and Board, Garner Public Library Board, the Garner Education Foundation Board, and the North Iowa Mental Health Board. Catherine was a longtime member of the Iowa Land Title Association, for several years she helped as a Waldorf Conversation Partner working with foreign students, and was a Breakfast Buddy at Garner Hayfield elementary school.

She was preceded in death by her husband, Wencl, July 27, 1998; her parents; and a sister, Carolyn Daly.

To order memorial trees or send flowers to the family in memory of Catherine Elizabeth Kadrlik, please visit our flower store.
Send a Sympathy Card