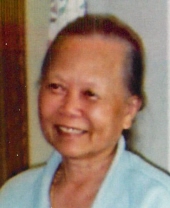 Funeral services will be held 10:30 A.M., Saturday, November 30th at Immanuel Lutheran Church in Forest City with Rev. Rod Hopp officiating. Her body will be cremated following the service. Inurnment will be in Oakland Cemetery in Forest City.

Visitation will be held from 5 to 7 P.M., Friday at the Petersen Lund Funeral Home, 505 N. Clark St., in Forest City and will continue one hour prior to services at the church.

Chanthy Sichanthongthip, the daughter of Thong and Pong Savath, was born December 7, 1939 in Luangprabang, Laos. She attended school in Laos. In 1958, she was married to Kham Sichanthongthip. They lived in Laos until 1986 when her husband, Kham and oldest son moved to the United States settling in Forest City. Chanthy and some of her children followed in 1988. She enjoyed cooking, fishing and especially helping raise her grandchildren. She was a member of Immanuel Lutheran Church in Forest City.

She was preceded in death by his parents; and one brother.

To order memorial trees or send flowers to the family in memory of Chanthy Sichanthongthip, please visit our flower store.
Send a Sympathy Card