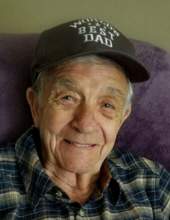 Funeral services will be held 10:30 a.m., Saturday, November 20, 2021 at First Lutheran Church in Britt with Pastor Anna Wolf officiating. Burial will be at Evergreen Cemetery with military rites by the Britt Veterans Ceremonial Unit.

Visitation will be from 4 to 6 p.m., Friday, November 19, 2021 at Cataldo Funeral Home, 178 First Ave. S.W., Britt and will resume one hour prior to services at the church on Saturday.

Charles Andrew Conaway Jr, the son of Charles and Dorothy (Pellum) Conaway, was born February 7, 1939, in Britt, IA.  Chuck moved with his family to Bloomington, IL until he was 7 years old when he made his home with Harry Nielson working on a farm outside of Britt, IA along with his brothers Art and Ted.  Chuck graduated from Britt High School in 1957.   Chuck then joined and served his country in the U.S. Army until he received an honorable discharge in 1962. On August 1, 1958, he married Lois Weiland at First Lutheran Church in Britt. They lived in Britt where they continued to farm south of town.  In 1967 they moved to Lake Worth Florida and Chuck became a partner with his brother in-law, Larry Weiland in Larry’s Roof Cleaning and Painting Company.  In 1973 they returned to Britt to raise their family. In 1976 Chuck and Lois managed the Britt Country Club, then Chuck went into the Plumbing, Heating and A.C. business.  Later buying the Maytag store and sold appliances.

Chuck was a dedicated and well-respected businessman in the Britt community. Chuck went on to retire in 2005.  Chuck loved his family. He was an avid fisherman and tried to teach his grandchildren the sport he so dearly loved. He worshiped his God in the beauty of nature.  Chuck loved all sports, he enjoyed playing golf, and was a two-time state champion in wrestling for Britt High School.

He was a member of First Lutheran Church and served on the board as a deacon.