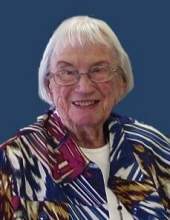 Charlotte Mae Larson, 94, of Garner, died Friday, January 16, 2015 at the Muse Norris Hospice Inpatient Unit in Mason City. Per Charlotte’s wishes, her body was cremated. Her remains will be laid to rest on Monday, January 19, 2015 at 12:30 p.m. at Madison Township Cemetery, Forest City with the Rev. Scott Kozisek of the St. Paul Lutheran Church in Garner officiating. In lieu of flowers, memorials may be directed to Hospice of North Iowa where she was a volunteer for many years.

Charlotte Mae Valley Hanson Larson, the daughter of Ray David and Blanche (Hanson) Valley was born on October 10, 1920, in Woden. She attended school and graduated from Woden Community Schools. She worked at the bank in Woden after graduation. On May 26, 1937, she was married to Herbert Morton Hanson at the Little Brown Church in Nashua, Iowa. They farmed together south of Crystal Lake on the family farm. After Herbert died in a farm accident, she moved to Garner and took the position of Hancock County Recorder. She enjoyed traveling, watching movies, and she was an avid reader . She was a member of Upper Flat Evangelical Free Church and later St. Paul’s Lutheran Church, Garner.