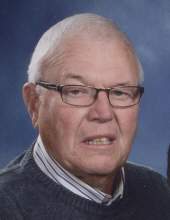 Funeral services will be held 10:30 A.M., Monday at First Lutheran Church in Britt with Rev. Willie Rosin officiating. Burial will be at Evergreen Cemetery with military rites by the Britt Veterans Ceremonial Unit.

Visitation will be held from 3 to 6 P.M., Sunday at First Lutheran Church in Britt and will resume one hour prior to services at the church.

Memorials may be directed to First Lutheran Church or West Hancock Athletic Boosters.

Chester “Chet” Vernon Eisenman, Jr., the son of Chester, Sr. and Catherine (Blankenship) Eisenman, was born July 14, 1938, at Britt. He graduated from Britt High School in 1957. Chet served his country in the U.S. Army. Upon his honorable discharge, he returned to Britt where he farmed with his father and brother, Don. On November 28, 1964, he married Sandra Kay Aase at First Lutheran Church in Northwood. They lived on the family farm northeast of Britt where they raised their family and Chet continued to farm with his brother, Don and later his nephews, Ron and Mark. Besides farming, Chet also worked at Winnebago Industries in Forest City until his retirement. In 2000, Chet and Sandy moved into Britt. In his retirement, he delivered Meals on Wheels and drove for Pritchard Auto. He enjoyed attending West Hancock school activities and loved watching sports.

He was a member of First Lutheran Church where he served on the church council. He belonged to the Britt Lions Club, was a board member and past president of the Britt Coop and a member of the Chain Gang at football games.