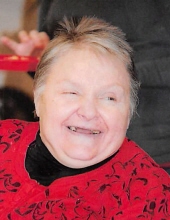 A memorial service will be held 4 P.M., Wednesday, October 19th at the Kinney Lindstrom Center at Opportunity Village in Clear Lake with Fr. Jim Dubert officiating. A rosary will follow the service at 4:30 P.M. with a visitation from 5 to 7 P.M. Graveside services will be held 10 A.M., Thursday at St. Boniface Catholic Cemetery in Garner.

Memorials may be directed to Opportunity Village in Clear Lake. Cataldo Funeral Home in Garner is in charge of arrangements.

Christine Marie Muff, the daughter of Benjamin and Clara (Pospisil) Muff, was born October 17, 1953 at Crete, Nebraska. At the age of two, she moved with her family to a farm north of Ventura. She spent time with her family until becoming a resident of Opportunity Village in 1999. She enjoyed dogs and watching movies, especially Maverick, Lassie and John Wayne movies. Christine was a true blessing to our lives. She taught our family and all that were close to her what life is all about, and that is love. Christine touched many lives at Opportunity Village and will be remembered by many, especially her special friend, Jane Trampel.

She was preceded in death by her mother, Clara, Sept. 12, 2008.
To order memorial trees or send flowers to the family in memory of Christine M. Muff, please visit our flower store.
Send a Sympathy Card