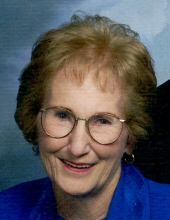 Memorial services will be held 10:30 A.M., Monday, April 13th at the United Methodist Church in Garner with Rev. Paul Evans officiating. Inurnment will be in Concord Township Cemetery in Garner.

Clare was born on a farm near Eagle Grove, Iowa on July 1, 1928 and graduated from Garner High School. She was a member of the Harbison Five, an adagio acrobatic group comprised of her siblings and formed by her mother just prior to World War II. She managed Snow White Grocery owned by her father, was a bookkeeper for Yohn Ready Mix, a secretary for Elling Insurance Agency and Barz Insurance Agency, and social work for the Hancock County Social Welfare Department. After a move to Yuma, Arizona for a few years, Clare worked for the Arizona Health Care Cost Containment Agency. She was an avid golfer much of her life, loved playing Bridge and Arabian Rummy with friends and family, and watching golfers on the Garner Golf Course. Clare and Royal moved to the Woodlands Creek Independent Living in Clive, Iowa in July of 2014 after living over 60 years in Garner.