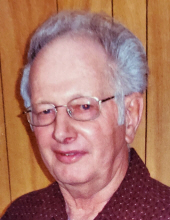 Funeral services will be held 10:30 A.M., Monday, January 4, 2021 at Woden Christian Reformed Church, 215 290th St., Woden with Rev. Mark Van Weelden officiating. The service will be livestreamed on the Cataldo Funeral Home Facebook page beginning at 10:20 A.M. Burial will be in the church cemetery.

Visitation will be held from 2 to 4 P.M., Sunday, January 3, 2021 at Woden Christian Reformed Church. Masks are required and social distancing guidelines will be followed.

Clarence Lee Harringa, the son of John and Lena (Bruns) Harringa, was born March 3, 1931 on a farm near Titonka in Kossuth County. He was baptized and confirmed at Ramsey Reformed Church. Clarence attended the rural schools of Bingham Township and graduated from Woden High School in 1950. He served his country in the U.S. Army for two years in Texas. Following his honorable discharge, he returned home to farm. On March 1, 1957 he married Marjorie Cooper at Woden Christian Reformed Church. They lived on a farm south of Woden where they raised their four children, farmed and raised livestock. Clarence enjoyed maintaining and enhancing his acreage through mowing and landscaping.

He was an active member of the Woden Christian Reformed Church where he served as a deacon, elder and cemetery sexton for many years.

He was preceded in death by his parents; son, David; great-granddaughters, Georgia and Grace Noteboom; two sisters and their husbands, Mag (Bob) Penning and Leona (Harry) Peters; and a brother-in-law, Gordon Brouwer.

.
To order memorial trees or send flowers to the family in memory of Clarence L. Harringa, please visit our flower store.
Send a Sympathy Card