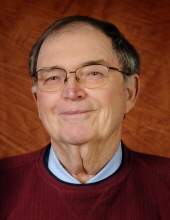 Funeral services will be held 10:30 A.M., Saturday, November 14th at Peace Reformed Church south of Garner with Rev. Mark Larson officiating. Burial will be in the church cemetery with military rites conducted by the Iowa Air National Guard Ceremonial Unit and the Garner Veterans Ceremonial Unit.

Visitation will be held from 4 to 6 P.M., Friday at the Cataldo Funeral Chapel, 160 E. 4th St., in Garner and will continue one hour prior to services at the church.

Memorials may be directed to Peace Reformed Church.

Clayton Lee Greiman was born in Albert Lea, MN on January 25, 1936. He came to Garner at the age of three months to become the adopted son of Ben V. and Iris Greiman. He was baptized and confirmed at Peace Reformed Church south of Garner. Clayton attended rural school near his home until the eighth grade and graduated from Garner High School in 1953. He entered the U.S. Army in March of 1954 serving in Europe. Upon his discharge, he entered the Iowa Air National Guard retiring in 1977 with the rank of Senior Master Sergeant after twenty-three years of service. On September 4, 1954 he married Mary Alice Baggs at St. Paul’s Lutheran Church in Garner. They lived in Germany from 1954 to 1956 while Clayton served in the U.S. Army. They then returned to Iowa and made their home on the Ben V. Greiman farm two miles south of Garner where they raised their three children. Clayton farmed in partnership with his father until 1971, when he and Mary Alice purchased the Garner Ben Franklin store. On June 1, 1974, he became the first Branch Manager for Home Federal Savings and Loan Association of Algona, when they opened their new office building in Garner. He was also a realtor at Schoneman Realty for a few years. Following his retirement he helped his son, Bill, with his farming operation.