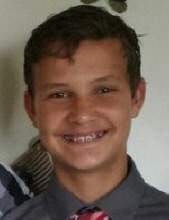 Burial will be held in Oakland Cemetery in Forest City.

Colby Lynn Schleuger was born May 26, 2002 in Mason City, Iowa the son of Curt and Gina (Cunningham) Schleuger. Colby was baptized at Immanuel Lutheran Church and was currently in confirmation classes. He was a freshman at Forest City High School where he was active in many different things. Colby had a love for animals and science; he had aspirations of becoming a veterinarian.

Colby loved being outdoors, enjoyed snowmobiling, riding dirt bike, hunting and shooting clay pigeons, playing on the computer, reading and hanging with his campground family. He had a huge heart, great sense of humor and was a faithful friend to many.

He is also survived by many cousins, great aunts and uncles, his camping family, and many friends and extended family that were all very important in Colby's life.