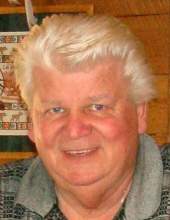 A gathering of family and friends will be held from 5 to 7 P.M., Tuesday at the Cataldo Funeral Chapel, 310 Main St., in Woden.

In lieu of flowers, memorials may be made to Lakeside Lutheran Home or Palo Alto Hospice both of Emmetsburg.

Collin Clifford Fjetland, the son of Clifford and Verlette (Moen) Fjetland, was born October 4, 1943 in Forest City, Iowa. He was baptized and confirmed at Forest City Evangelical Lutheran Church and attended Forest City High School. On June 30th, 1963, he was united in marriage to Carmen Marie Brandt at Immanuel Lutheran Church in Titonka, Iowa and to this union, they had 3 children. Collin worked at Winnebago Industries, Ley Motors and later opened Lake Auto in Crystal Lake until retiring in 1999. In his retirement, Collin drove school bus for Forest City Schools.

Collin loved classic cars and spent much of his life restoring them. He was a member of the Gamblers Car Club and enjoyed attending car shows. He also had a passion for music and for 25 years he was a member of the “Rondels Band”, which included his two brothers Lon and Jerry and a close family friend Lou Banta. He enjoyed playing the violin, keyboard and steel guitar.

He was preceded in death by his mother, Verlette (Moen) Fjetland; his father, Clifford Fjetland; brother, Jerry Fjetland; a granddaughter, Calista Fjetland; and his grandparents.
To order memorial trees or send flowers to the family in memory of Collin C. Fjetland, please visit our flower store.