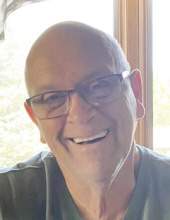 A public visitation will be held from 12:00 noon until 1:00 P.M., Wednesday, November 11th at Immanuel Lutheran Church in Swea City. Masks are required and social distancing guidelines will be followed. Cataldo Funeral Home is in charge of arrangements.

Dale Gene Link, the son of Eldon and Phyllis (Gies) Link, was born May 7, 1955 in Buffalo Center. He attended Grant Township country school and graduated from Swea City High School in 1973. During high school, he was involved in FFA where he earned the Star Farmer Award. Dale also showed cattle in FFA and 4-H. Many would remember him with his fast cars in high school and Three Dog Night playing on the 8-track. On September 11, 1976 he married his high school sweetheart, Lori Ann Kvamsdale at Immanuel Lutheran Church in Swea City. To this union a daughter was born, Amanda Sue. Dale farmed near Swea City and drove semi and school bus from 1973 to 1990. He also drove for Velma Gene Polzine and Allan Dudley hauling pigs and cattle. In 1990, he left farming and moved his family to Blue Earth, MN. Dale drove for Bob Price as a grain and fertilizer hauler until 1993 when he began driving his own truck and trailer. For the next 15 years, he was an owner operator leased to Smithway Motor Express based in Fort Dodge. He hauled over-sized machinery to many ports all over the country. He later worked for Crete Carriers based in Nebraska from 2010 to 2019. He earned Driver of the Month Award several times and logged over 1.5 million safe miles. On October 12, 2019 he and Lori moved to Spencer to be near their daughter, Amanda and her husband, Jeremy. They absolutely loved it. On January 27, 2019 he began working for Pro Cooperative in Ruthven and was home every night to spend time with his family. He loved visiting Amanda and Jeremy on their farm and seeing their fur grandson, Smokey. If you knew Dale, you would know how he loved to smile and laugh. He always said, “If I have made one person smile today then I’ve done my job for the day! Keep them gears shifting and roll on 18-wheeler.”