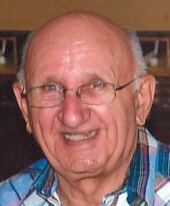 Funeral services will be held 10:30 A.M., Thursday, March 13th at the Cataldo Funeral Chapel, 160 E. 4th St., in Garner with Rev. Paul Evans officiating. Burial will be in Concord Township Cemetery with military rites by the Garner Veterans Ceremonial Unit.

Visitation will be held from 4 to 7 P.M., Wednesday at the Cataldo Funeral Chapel and will continue one hour prior to services.

Memorials may be made in care of the family.

Dale Poncin, the son of Victor and Mae (Patterson) Poncin, was born March 19, 1929 at Webster City. He attended school at Dows. Dale served his country during the Korean Conflict in the U.S. Army. On June 18, 1961 he married Beulah Matz. They lived all of their married life in Garner. Dale was employed at Ziesmer Livestock Transportation for twenty-five years and Herman Buns Construction. He also drove taxi for Prairie View Apartments in Garner until 2012. He enjoyed spending time with his family and camping.

He was a member of the Edwin Jante VFW Post 5515 in Garner.

He was preceded in death by his parents; and a great-granddaughter, Rachel Elizabeth Fjeld.

To order memorial trees or send flowers to the family in memory of Dale Poncin, please visit our flower store.
Send a Sympathy Card