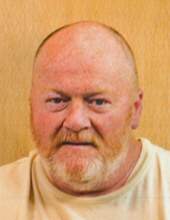 Visitation will be held from 4 to 7 P.M., Tuesday at the Cataldo Funeral Chapel, 160 E. 4th St., in Garner and will continue one hour prior to services at the church.

Memorials may be directed to the donor's charity of choice.

Daniel Laverne Farris, the son of Laverne Farris and Marilyn (Leegaard) Schnoor, was born April 16, 1959 in Albert Lea, Minnesota. He attended school in Albert Lea, Forest City and Garner. Dan lived in Garner and worked in the North Iowa area. On April 23, 1983 he married Cheryl Schlei in Garner. He enjoyed his family, watching John Wayne movies, puzzles, and was an avid Minnesota Twins fan.

He was a member of St. Paul Lutheran Church in Garner.

He was preceded in death by his mother, Marilyn Schnoor; step-mother, Dotti Farris; and his grandparents. CATALDO FUNERAL HOME (641) 923-2841 www.cataldofuneralhome.com.

To send flowers to the family in memory of Daniel L. Farris, please visit our flower store.