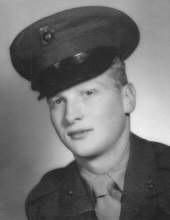 Memorial services will be held 10 A.M., Saturday, November 1st at the Cataldo Funeral Chapel, 160 E. 4th St., in Garner with Fr. Dennis Miller officiating. Military rites will be conducted by the Garner Veterans Ceremonial Unit. Inurnment will be in Sacred Heart Catholic Cemetery in Rockwell. There will be no visitation.

Darl “Pat” Eugene Bielefeld, the son of Charles and Leona (Hood) Bielefeld, was born December 16, 1930 on a farm near Thornton, Iowa. He attended the rural schools near Rockwell and graduated from Rockwell High School in 1949. After high school, Pat was employed at Standard Oil Company in Mason City. In 1951, he enlisted in the U.S. Marines and served his country during the Korean Conflict. After six months in the front lines as a medic, he was hospitalized for fatigue going from 140 to 100 pounds. Following his honorable discharge, he returned to Iowa and attended college for one year at Grinnell. In 1956, he enlisted in the U.S. Air Force. In 1963, he married Lillian Guggenheimer. The marriage later ended in divorce. In 1978, he retired from the U.S. Air Force as an E-6 staff sergeant and moved to Klemme.

Pat is survived by two brothers, Charles (Regina) Bielefeld of Verndale, MN and Walter (Lenora) Bielefeld of Lime Springs; a twin sister, Patty Smith of Mason City; and many nieces and nephews.

He was preceded in death by his parents; a brother, William; a sister, JoAnn Smith; and former wife, Lillian.
To send flowers to the family in memory of Darl "Pat" Bielefeld, please visit our flower store.