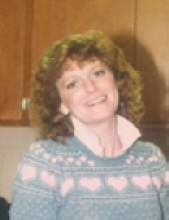 A gathering of friends and family will be held from 12:00 P.M. till the time of the service of Friday.

Inurnment will be in Madison Township Cemetery in Forest City.

Memorial contributions may be directed to the Darla Su Beck memorial fund in care of the family.

Darla Su was born April 13, 1959, the daughter of Ordean “Fred” Fredrickson and Carmen (Awe) Holland. She attended and graduated from Forest City High School in 1977. She was married to Michael Hoeft on October 1, 1977, to this union three children, Christopher, Alysha and Jill were born and she became a stepmother to Justin Hoeft, she later divorced from Michael. Darla then was married to Mike Beck in 1994, to this union one son, Cole was born, they later divorced.

Darla was employed at Duncan Heights as a caretaker.

Darla enjoyed gardening and taking care of her plants, junking, collecting rocks and camping in her earlier years. She loved spending time with her family, especially her grandchildren. Darla will be dearly missed by all who knew and loved her.