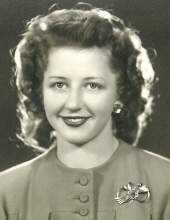 Darlene “Dolly" Mavis Leavens, 85, of Forest City died Sunday, July 24th at her home surrounded by her family. Dolly was under the care of Hospice of North Iowa.

Upon her wishes she was cremated and private family services will be held.

In lieu of flowers, memorials may be directed to Hospice of North Iowa in her name.

Darlene was born in Forest City, Iowa the daughter of Arnold and Fern (Thompson) Hefte on August 26th, 1930.

She attended Forest City schools and graduated in 1947. She was also confirmed in the Lutheran Church.

She was married to Earl Hanson in 1947 and to that union, four children were born, Cynthia, Twyla, Debra, and Gregory. Earl and Dolly moved to Amarillo Texas where their daughters were born and then to Southern California where Greg was born. After the children were in school, she started working at the TG&Y department store close to their home in Anaheim. Later she became a dietician at the state hospital for mentally challenged children in Costa Mesa California where she worked until she retired in 1991. Dolly moved back to Forest City after she retired.

Dolly was a collector and it would be easier to say what she didn't collect rather than what she did collect. She loved antiques and dishes and she found many of her treasures at garage sales. She bought a home in Forest City that she admired as a child and made it "Dolly's Dream Home". She spent many enjoyable hours finding ways to display her collections. She never minded dusting because she could admire each piece again. Dolly along with her two sisters, Kitty and Enid, and her cousin, Arlene Baker, stripped the old alligatored paint off the outside of her house using tips from "This Old House" magazine and then repainted the house. It took them four years to accomplish the task, one year for each side. Dolly always wanted to do things the right way, not taking any "shortcuts".

On April 26, 2001, Dolly married Duane "Red" Leavens in Boone, Iowa. They were a perfect match and Dolly was happiest when Red was by her side. They worked together on Dolly's list of projects; they also loved to listen to music and dance. Red never had any children of his own but he quickly became a grandpa to Dolly's grandchildren. They thought they had the most beautiful grandchildren in the world! Dolly and Red had 15 of the happiest years of their lives together, for that her children are grateful.

Darlene was preceded in death by her parents; her first husband, Earl Hanson; her grandchild, Sarah Quinn and brother-in-law, Edgar (Pete) Curley.
To send flowers to the family in memory of Darlene "Dolly" Mavis Leavens, please visit our flower store.