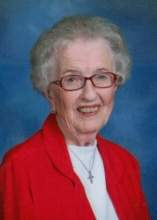 Funeral services will be held 10:30 A.M Tuesday, July 15, 2014 at the United Methodist Church in Forest City with Rev. Charles Layton officiating. Burial will be in Madison Township Cemetery.

Visitation will be held from 4 to 7 P.M., Monday at Petersen Lund Funeral Home, 505 North Clark St., in Forest City and will continue one hour prior to services at the church.

Darlene Mae Larson, the daughter of Melvin and Eliza (Johnson) Hill, was born May 14, 1924 in Kanawha. She was baptized into the Methodist faith at the Kanawha Methodist Church. Darlene attended a rural school near her home and graduated from Corwith High School in 1941. She furthered her education at Hamilton Business College in Mason City. Darlene worked at the Treasury Department in Washington, D.C. in 1942. On July 18, 1943 she was united in marriage to Robert Larson of Crystal Lake at the Kanawha Methodist Church. To this union a son, Larry and two daughters, Patricia and Twyla were born. In 1944, Robert entered the service with the U.S. Navy. Darlene worked as a secretary at Lampert Yards in Kanawha while Robert was in the service. They farmed in the Forest City area until 1973. From 1970 to 1986 Darlene and Robert delivered motor homes for Winnebago. They spent several winters at Laughlin, Nevada and enjoyed trips to Hawaii, Anchorage, Alaska and seeing all of the United States. In 1994, she began working at the Lodge Restaurant in Forest City. She also drove shuttle bus for Winnebago Grand National Rally for many years. Darlene enjoyed attending her grandchildren's programs, sports activities and attending coffee with friends and neighbors. She was an avid fan of the Hawkeyes, Vikings and Twins.

She was preceded in death by her parents; husband, Robert in 1991; son, Larry Larson; a sister, Myrna Hill; and brothers, Mervin and Darold Hill.

To order memorial trees or send flowers to the family in memory of Darlene M. Larson, please visit our flower store.