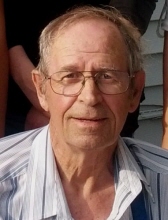 MASON CITY - David D. Buckley, 72, of Mason City, died Wednesday, August 7, 2013 at his home in Mason City surrounded by his family, following a short and courageous battle with lung cancer.

As per his wishes, his body was cremated.

A Memorial Service will be held at 3:00 PM on Saturday, August 10, 2013 at Petersen Lund Funeral Home 505 N Clark Street in Forest City with Hospice Chaplain Janet Dorenkamp officiating. Inurnment will be at Oakland Cemetery in Forest City. Visitation will be held an hour prior to service at the funeral home.

David Dean Buckley, the son of Clyde and Viola (Moen) Buckley, was born on June 21, 1941 at Irish Hospital in Forest City, Iowa. He was baptized at Immanuel Lutheran Church in Forest City and confirmed at Elk Creek Lutheran Church near Kensett. He attended country schools and later graduated from Hanlontown High School in 1959. Dave was united in marriage to Deanna Dahl in 1961 and to this union was born Denise, Dawn, Darren and Dana. The couple later divorced.

Dave "Buck" had a very strong work ethic and had various types of jobs that took him to many parts of the country. In his early career, he worked locally for J & L Tire, The Creamery, Arco Fertilizer, Joice Elevator, Kensett Homes and ran his own terragating business. In 1986 he moved south and became a Regional Manager for Glacier Water. After retiring, he chose to return to be closer to his family.

Dave was very talented and was always tinkering on a project and generous in assisting others. He had numerous hobbies and some favorites included fishing, camping, gardening, building and remodeling homes, woodworking, and restoring cars and trucks. He was very proud of restoring his father's Chevy pickup. In his younger years he enjoyed riding his Indian Chief motorcycle. Dave had a unique sense of humor and always had a great story to tell that left you with laughter and a smile. He really enjoyed attending his grandchildren's sport events and activities.

To order memorial trees or send flowers to the family in memory of David D. Buckley, please visit our flower store.
Send a Sympathy Card