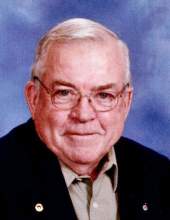 A memorial visitation will be held from 3 to 5 P.M., Sunday, January 24, 2021 at St. Boniface Catholic Church with a rosary at 2:30 P.M. Masks are required and social distancing guidelines will be followed.

David Joseph Welsh, the son of Emmet and Blanche (Walsh) Welsh, was born February 18, 1944 in Huron, South Dakota. He attended DavenHill country school and graduated from Bancroft High School in 1962. David studied at South Dakota State University, worked on the family farm and joined the Army National Guard until he was honorably discharged in 1971. On April 20, 1968 David and Sandra Kretchmer were married in Iroquois, SD. They lived on the family farm near Carpenter, SD. David began working for Farmland Industries where career transfers took the family to Nebraska and Minnesota before settling in Garner, IA in 1977. He also worked as the maintenance manager for Best Western in Clear Lake before officially retiring in 2010.

David was active in his community as president of the Garner Chamber of Commerce in 1986, a member of the Garner Volunteer Ambulance Service and a former city council member in Klemme. He was an active member of St. Boniface Catholic Church, Knights of Columbus and the American Legion in Klemme.

He was a devoted father and grandfather and had a deep conviction in his faith. He enjoyed spending time with his family, teaching his grandkids to fix things, tinkering with his many projects in his garage, and he always had a joke and story to tell. He enjoyed coffee with the locals and Molly B’s Polka was always on TV.

He was preceded in death by his wife, Sandra (Kretchmer) Welsh; parents Emmett and Blanche Welsh; and brothers, Mike and Dick Welsh; brothers-in-law, Tom Tyrrell and Keith Zell; and sisters-in-law, Ann Welsh, JoAnn Kretchmer and Donna Zell.
To send flowers to the family in memory of David J. Welsh, please visit our flower store.