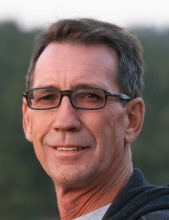 Funeral service will be held at 10:30 AM on Friday, July 19, 2013 at Petersen Lund Funeral Home in Forest City with Pastor Scot McCluskey of Galilean Lutheran Church in Clear Lake officiating. Burial will be at Madison Township Cemetery in rural Forest City.

Visitation will be held from 5 to 7 PM on Thursday, July 18, 2013 at Petersen Lund Funeral Home 505 N Clark Street in Forest City and will continue an hour prior to the service.

David was born April 13, 1957 in Forest City, Iowa to Dean and Arlene Gambell where he grew up on a farm just south of town. On October 24, 2009, in Vero Beach, Florida, he married Cindy (Cosgriff) Norman.

David's passion in life was his music. An avid guitar player since his teenage years he kept with his practicing in order to perfect. David enjoyed the old time music he learned from his dad and enjoyed many good times playing the guitar with his "pa" on the fiddle while his "ma" kept time with the beat. Later in life David enjoyed playing blue-grass and gospel guitars with his wife, Cindy. To add to the "sound" of the music David was becoming an enthusiastic harmonica player and loved learning to achieve that "bluesy" sound. His talent with his music seemed endless, effortlessly playing the guitar and harmonica together at the same time.

Photography was another interest that David pursued with vivacity. It was not only the capturing of the moment of the photo, but what he could do with the photograph afterwards to make it better, make it fun, or just make someone laugh. David's creativity when it came to photography never stopped and he left behind many pictures to be treasured over the years.

David is preceded in death by his brother, Art Gambell.


To order memorial trees or send flowers to the family in memory of David Leroy Gambell, please visit our flower store.
Send a Sympathy Card