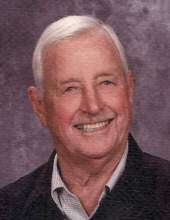 Visitation will be held one hour prior to services at the church on Saturday. Cataldo Schott Funeral Home is in charge of arrangements.

Memorials may be directed to Waldorf Lutheran College Foundation.

David Mandt Anderson, the son of C. Tim and Thea (Mandt) Anderson, was born July 6, 1927 in Forest City. He graduated from Forest City High School in 1945. After high school, at the age of seventeen, Dave enlisted in the U.S. Navy serving his country from 1945 until 1948. Following his honorable discharge, he returned to Forest City and continued his education at Waldorf College where he graduated from in 1950 and met his future wife, LaVonne J. Nelson. On June 3, 1951 they were married in Forest City. The couple lived in Forest City where they raised their two children, Mark and Joni. Dave worked in insurance and real estate until 1964 when he became the postmaster in Forest City. He continued in this position until his retirement in December of 1988. Dave enjoyed golfing, playing cards, shooting pool at the Senior Center and most of all, his grandchildren and great-grandchildren.

He was preceded in death by his parents; wife, LaVonne, Sept. 3, 1969; and a sister, Thora Phelps.
To order memorial trees or send flowers to the family in memory of David M. Anderson, please visit our flower store.