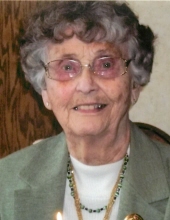 Upon her wishes she was cremated and private family services will be held at a later date.

She was united in marriage to Lehman Tweeten May 14, 1939. To this union three children were born; Sonje, Byron, and Nancy. There are four grandchildren and five great-grandchildren.

She retired from school in 1983 and then spent winters in McAllen, TX and summers at Jefferson Lake, Cleveland, MN.

She was a member of Immanuel Lutheran Church in Forest City and associate member of Our Saviors Lutheran in McAllen, TX.

Her hobbies were knitting, china painting, sewing and doing Hardanger

She was preceded in death by her parents; her husband, Lehman Tweeten and her son, Byron Tweeten.

In lieu of flowers, the family requests that memorials may be sent to Hospice of North Iowa Inpatient, Mason City, Iowa 50436.
To order memorial trees or send flowers to the family in memory of Delores H. Tweeten, please visit our flower store.
Send a Sympathy Card