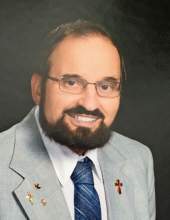 Deacon Dennis E. Popowski, 68, of Garner died peacefully with family by his side on Thursday, February 8, 2018, at Mercy Medical Center – North Iowa in Mason City.

A Mass of Christian Burial will be held 2 P.M., Sunday, February 11th at St. Boniface Catholic Church with Fr. Jim Dubert, Fr. Paul Lippstock and other Priest friends as concelebrants. Burial will be in the church cemetery with military rites by the Garner Veterans Ceremonial Unit.

Visitation will be held from 4 to 7 P.M., Saturday at St. Boniface Catholic Church with a Scriptural wake service at 3 P.M. followed by a Knights of Columbus rosary. Visitation will continue one hour prior to services at the church.

In lieu of flowers, memorials may be directed to St. Boniface Catholic Church, Knights of Columbus or the Archangels Catholic Cluster.

Dennis Edward Popowski, the son of Roy and Marjorie (Prellwitz) Popowski, was born on March 4, 1949, in Ivanhoe, Minnesota. As the oldest of seven children on their family farm, Dennis later graduated from Canby Vocational Technical College in 1969 with a degree in Farm Equipment and Diesel Mechanics. Dennis married his bride and the love of his life, Charlene M. Verly, from Marshall, MN, in 1973. Dennis joined the Navy Seabees as a construction mechanic in 1969 and was stationed in Alaska, Vietnam, Guam, and Rhode Island. As a Petty Officer 2nd Class E-5, he was honorably discharged in 1973. Dennis moved to Hartley, IA, and worked at Ruby-Miller John Deere Equipment until 1983. Upon moving to Garner, Dennis worked at Circle H John Deere Implement as a service technician and shop foreman for 20 years. In 2002, Dennis started at Winnebago Industries and worked in customer service for 14 years. After five years of training with the Catholic Diaconate in Waterloo, IA, Dennis was ordained in 2001 as a permanent deacon with the Archdiocese of Dubuque. Dennis was very involved with serving his church and community, while often assisting at Mass. Along with Char, Dennis worked with faith formation, baptism classes, marriage preparation, and Marriage Encounter activities. Dennis also served as the Financial Secretary in the Knights of Columbus at St. Boniface for 32 years. He enjoyed working and playing alongside his family while gardening, delivering newspapers, mowing lawns, camping, fishing, playing games, and visiting family.

Dennis was preceded in death by his parents; and a grandson.
To send flowers to the family in memory of Dennis E. Popowski, please visit our flower store.