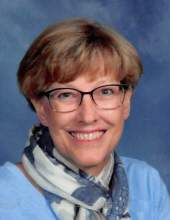 Funeral services will be held 1:00 P.M., Saturday, December 29th at the United Methodist Church in Garner with Rev. Paul Evans officiating. Burial will be at Buffalo Township Cemetery south of Titonka.

Visitation will be held from 4 to 7 P.M., Friday at the United Methodist Church in Garner and will resume one hour prior to services at the church.

In lieu of flowers, memorials may be given to Hospice of North Iowa or the Garner United Methodist Church.

Diana Sue Movick, the daughter of Harold and LaVaughn (Akkerman) Wibben, was born April 13, 1963 in Britt. She grew up in Titonka where she graduated from high school in 1981. Di continued her education at DMACC in Ankeny. On October 9, 1982 she was married to Michael Movick at the United Methodist Church in Titonka. They lived in Richfield, Utah where Di was employed as a secretary at a chiropractic office. In May of 1989, they moved to Fort Dodge and in 1994 to Garner. Di was employed at IMT in Garner and RSB Bank as a teller. She enjoyed spending time with her family, sewing and golfing. She was an avid Iowa Hawkeye and Minnesota Vikings fan.

She was a member of the Garner United Methodist Church where she served on several committees.

She was preceded in death by her husband, Mike, Dec. 9, 2017; her father, Harold in 2005; father-in-law, Eugene Movick; paternal grandparents, Harm and Martha Wibben; and maternal grandparents, Clarence and Hazel Akkerman.
To send flowers to the family in memory of Diana "Di" S. Movick, please visit our flower store.