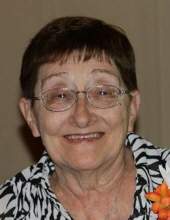 In lieu of flowers, memorials may be directed to a charity of your choice.

Diana Elizabeth Christopherson, the daughter of Michael and Saima (Sohlo) Steinbauer was born July 15, 1939 in Milwaukee, WI. She attended Wilson High School in St. Paul, MN, graduating with the Class of 1957. She was united in marriage to Edward C. Christopherson on August 1, 1959 and to this union, three children were born: Edward, Gwendolyn, and Mark. The Christopherson family made their home in Minnesota and Iowa throughout the years as she stayed home raising her three children. Later, she worked at Pamida in Wadena, Minnesota and Forest City, Iowa as a clerk for over 35 years.

In Diana’s younger years, she enjoyed camping, boating, sewing, ceramics, cooking, traveling, and spending time with their friends. Later in life she enjoyed BINGO, watching Court TV and reality TV shows, and surfing the internet, especially Facebook. What she cherished most, however, was her family that she loved so dearly, spending as much time with them as she could.

She was preceded in death by her husband; parents; and brother, Kenneth Steinbauer.
To send flowers to the family in memory of Diana E. Christopherson, please visit our flower store.